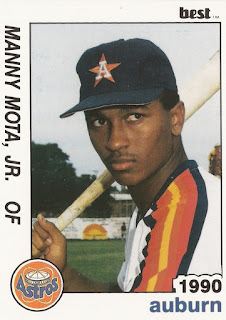 Mota, though, also had a history of injuries and the once-top-prospect and member of the baseball-playing Mota family moved teams again to Arbuckle's Phillies.

"I remember seeing him in college, and he did everything well - except that he swung through a lot of pitches," Arbuckle told The Inquirer. "But he's one of those guys you take a flier on, because, if his wrist is all right and you can get him healed up, he can do some things."

As it turned out, Mota played just three more seasons. He never made the majors.

Mota's career began in 1990, taken by the Astros in the second round of the draft out of Fullerton College.

Mota, whose given name is Manny Mota Jr., is the son of longtime major leaguer Manny Mota. He's also the brother of Andy Mota and Jose Mota, who also made the majors. Gary Mota, however, never made the majors.

In August 1990, The Los Angeles Times called Mota the "tallest and strongest" of the brothers.

"I kind of knew, how should I say this, that I had the best overall tools in the family," Mota told The Times then. "A couple of years ago, I started really growing and I thought, 'Oh, my God, what's going on?' But there is nothing fat. It's all muscles."

Mota played his first year at short-season Auburn. He hit .258 over 69 games. He then moved to high-A Osceola for 1991, but got into only 22 games due to a wrist problem.

He played the full season of 1993 at Asheville, hitting a resurgent .291 with 23 home runs. His season was enough to be named the organization's "future star" for 1993, but he saw 27 games at AA Jackson that year in another season cut short by wrist issues.

Mota returned to the Astros system for 1996. In August 1997, he found himself playing at high-A High Desert with the Diamondbacks. He remained optimistic, according to The Times.

"I just hope I can build on all my injury problems and the mistakes I've made in the past," Mota told The Times. "It's still very important for me to make the big leagues, because I love this game."

Mota also played that year at independent Bend and in Mexico, ending his career short of the majors.