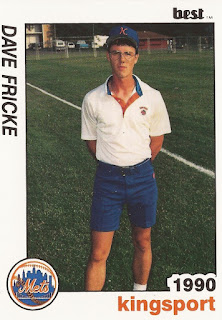 On the occasion of Dave Fricke being named a top athletic trainer by a magazine in 2011, Waterloo West Athletic Director Anthony Pappas explained why.

Fricke, Pappas wrote on the school's athletic site, remained constantly on call watching over the Iowa school's young athletes and comforting the parents of those injured.

"On a more personal note," Pappas wrote, "Dave has not only been a respected colleague, but also a good friend. He has been a big part of six Final Four appearances in girl's basketball ... His management of our injury situations has allowed us to achieve this great success."

Fricke served at Waterloo West as a trainer for two decades, a career that ended in his retirement in 2016. He turned to training youth after a brief career as a trainer in the pros.

Fricke studied training at Eastern Kentucky University and the University of Northern Iowa.

He spent his brief pro training career with the Mets, serving at rookie Kingsport.

Fricke soon turned to high school training and he found a home at Waterloo West. In 2009, he won the Outstanding Sports Medicine Award as the best in the state.

"He has made strong connections with all of our athletes and coaches," then-school AD Jeff Frost told the school's site after that award. "The trust level and bond between them is unbelievable. Dave always has the best interest of the athlete in mind."

In July 2011, Fricke addressed to The Waterloo-Cedar Falls Courier one of the big issues in youth athletic training: Concussions. He spoke after the passage of a new state law requiring concussed student athletes to be removed from competition.

"It forces kids to see a doctor," Fricke told The Courier. "Before, you'd let the parents know and some parents might take them (to the doctor), some parents wouldn't take them. That makes my job a whole lot easier. I don't have any issues with parents or coaches. It's cut and dried - they've got to be cleared."