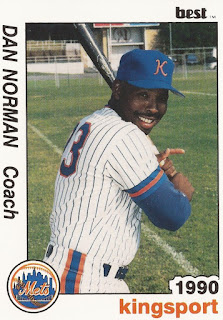 Dan Norman's first managerial stint came with some barriers, some language barriers, according to The South Florida Sun Sentinel.

Norman managed at independent Miami in 1987, a single-A club that included multiple players from Japan.

"The thing I do now is talk real slow," Norman told The Sun Sentinel of his approach. "I try to say one key word that they might pick up. I think the most important thing is the tone of my voice. Fortunately, baseball is baseball wherever you go."

Norman went a lot of places in his career, both as a player and as a coach. He made the majors with the Mets and Expos over five seasons as a player. He then managed and coached in the minors and independent ball for several more campaigns.

Norman's career in baseball began in 1974, taken by the Reds in the 15th round of the draft out of Barstow College in California.

He started at rookie Billings. He made AA Trois-Riveres in 1976 and AAA Indianapolis in 1977. he then moved to the Mets mid-1977 and soon made New York.

After spending a season back in the minors, Norman returned for one final look at he bigs in 1982, with the Expos. He hit .212 in 53 games. He picked up one of his hits as a pinch-hitter in a key spot in a May win, after hitting two pitches just foul.

"I had two good swings before the hit," Norman told The Associated Press. "I'm happy I came through, because my other two times up this year, I struck out."

Norman continued in the minors through 1986, then became a player-manager with Miami.