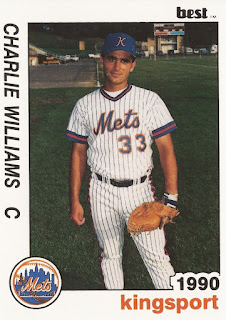 Charlie Williams, the pitcher who played in the majors in the 1970s, had the distinction of being traded for a Hall of Famer in Willie Mays.

That Charlie Williams signed with the New York Mets in 1968 after being taken in the seventh round of the draft.

This Charlie Williams started his career in 1989, signed by the Mets as an undrafted free agent out of Royal Sunset High School in Hayward, Ca.

Williams signed with the Mets in July 1989, having hit .340 for Sunset. He went to high school in California, having been born in Mexico City.

With the Mets, Williams played 29 games at catcher between rookie Kingsport and the Gulf Coast League. He played 24 of those games at Kingsport. Overall, he hit .130, picking up 10 hits in 77 at bats. He had three RBI and one stolen base, marking the extent of his career.