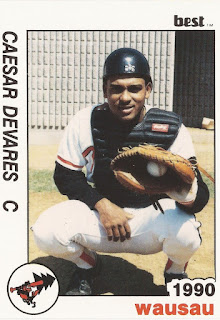 Orioles prospect Matt Riley made it to AA in 1999 and showed off his fastball, according to The Baltimore Sun and he impressed his catcher Cesar Devarez.

"I've been catching for 10 years," Devarez told The Sun that May, "and I haven't seen many guys who can pitch like that."

In those 10 years, Devarez made the majors twice. He got into a total of 16 games for the Orioles, marking the extent of his major league career.

Devarez' career began in 1988, signed by the Orioles as an amateur free agent out of his native Dominican Republic. He's also credited as Cesar Devares.

Devarez started with the Orioles at rookie Bluefield, getting into 12 games there. He moved to single-A Wausau for 1990, then high-A Frederick in 1991.

He made AAA Rochester in 1995. He then made Baltimore that June. Deverez got into six games for the Orioles that year, four at bats. He went hitless.

Devarez returned to the Orioles for 10 more games in 1996. He picked up two hits in 18 at bats, one of those hits being a triple.

He went on to play the next three seasons between the Cubs, Devil Rays and Orioles systems. He also played in Mexico. From 2001 to 2003, he played for independent Bridgeport. He went 4 for 4 in a May 2002 game. His final pro time came in 2003 for Bridgeport.

Devarez then went on to a career as a coach. From 2005 to 2012, he served as a coach for short-season Aberdeen.