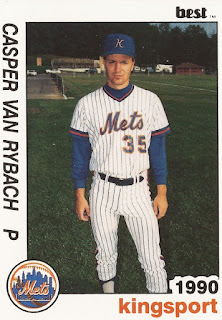 Cap Van Rynbach was a member of a select group of players in 1992, one that included future Hall of Famer Bert Blyleven.

Van Rynbach was one of six active players in pro baseball to hail from the Netherlands, according to one account.

Van Rynbach, however, never came close to the heights of his countryman Blyleven, or even close to the majors. He played two seasons as a pro, never making it to single-A.

Van Rynbach's career began in 1990, taken by the Mets in the 12th round of the draft out of Iowa Western Community College.

Iowa Western still counts Van Rynbach among its list of players taken in the draft.

Van Rynbach started with the Mets at rookie Kingsport. The pitcher got into 12 games, starting nine. He went 4-1, with a 4.01 ERA.

That 1992 list of active Dutch pro baseball players appeared to include Van Rynbach after his career had concluded. While counted among the active players, Van Rynbach isn't credited as playing that year or again.