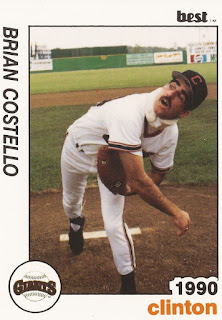 Brian Costello looks back to his first career as basis for his second.

Costello's first career was as an athletic trainer in the minors. His second, according to his practice bio, is as a physician assistant in 2017 at a California orthopedics practice.

"An area of interest for me is sports medicine," Costello's bio at Webster Orthopedics reads, "as I can use my experience in professional baseball to better care for our patients."

Costello's athletic training career lasted four seasons, from 1989 to 1992. He spent all four seasons in the Giants system.

He became a trainer out of Cal State Hayward. He earned a degree in physical education.

Costello started with the Giants at single-A Salinas in 1989. He moved to single-A Clinton for 1990, wearing a neck brace while mimicking a pitcher on his 1990 Best card.

His 1990 season is also when he received certification from the National Athletic Trainers Association. He then received his masters in sports medicine in 1992,

Costello served as trainer at AA Shreveport in 1991 and high-A San Jose for 1992, marking the extent of his minor league training career.