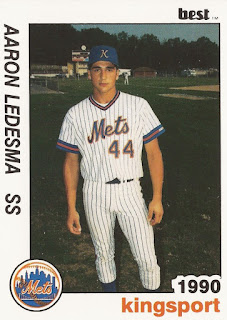 Aaron Ledesma smacked a single and broke the tie. The Tampa Bay Devil Ray came up in this August 1999 contest with the score tied at four. His single gave his Devil Rays a one-run lead.

"It feels good to come through," Ledesma told The Associated Press afterward. "It has been kind of a roller coaster ride for me this season, but a hit like that makes things a lot easier."

Ledesma came through for the Devil Rays in his fourth season in the majors. He debuted in 1995 with the Mets and arrived in Tampa for their inaugural season in 1998.

In all, Ledesma played in five major league campaigns, went on to coach in the minors and then, in 2012, opened up a yoga studio outside Tampa.

Ledesma's career began in 1990, taken by the Mets in the second round of the draft out of Chabot College in California.

After spending 1996 at AAA with the Angels, Ledesma signed with the Orioles for 1997. He got into 43 games for Baltimore that year, hitting .352.

Ledesma arrived with Tampa in the expansion draft. He proceeded to get into 95 games for the new club and hit .324, with 29 RBI. He picked up one of those RBI in a May win over the Orioles.

"When you play a team like that, you have to take advantage of whatever mistakes they make," Ledesma told The AP afterward that game. "And they're not going to make too many mistakes."

He saw one more season, playing at independent Long Island in 2002, ending his career.

Ledesma went on to coach, serving at high-A Tampa in 2008, then as an assistant coach at AAA Scranton and manage at single-A Charleston in 2011.