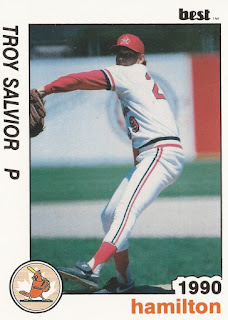 Troy Salvior did his part in this August 1990 game, but his Hamilton Redbirds couldn't get the win.

Salvior came on in the ninth inning against Batavia and got his team to extras. He gave up two hits over two innings of work, preserving the stalemate in a game Hamilton lost in the 11th.

Salvior went those two innings in his first season as a pro. He went on to play three seasons. He made AA, but he didn't make it higher.

Salvior's career began that year in 1990, taken by the Cardinals in the 21st round of the draft out of Hillsdale College in Michigan.

Salvior made first-team all-conference at Hillsdale in 1990. He also won team MVP that year.

At short-season Hamilton, Salvior got into 29 games, saving 14 and turning in a 2.72 ERA. He also won an invite to instructional league that fall.

Salvior split 1991 between high-A St. Petersburg and AA Arkansas. He got into 13 games at Arkansas and 38 at St. Petersburg. He had a 3.55 ERA overall. He picked up an April win, throwing a scoreless ninth.