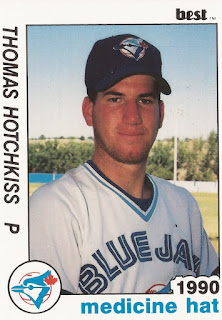 Tom Hotchkiss proved a workhorse for Santa Clara University in 1990.

Hotchkiss appeared in 35 games for the club in all, tied for the fourth most appearances in school history. Thirty-three of those came in relief, a number tied for eighth all-time, according to the school's record book.

Hotchkiss pitched well enough that year to catch the eye of scouts and the Toronto Blue Jays. He went on to a professional career that spanned four seasons. He never made AA.

Hotchkiss' career began that year in 1990, taken by the Blue Jays in the 27th round of the draft out of Santa Clara in California. He's also credited by his formal name, Thomas Hotchkiss.

Hotchkiss started with the Blue Jays at rookie Medicine Hat. He helped the club to a July win in relief, picking up his share of 15 team strikeouts on the day. He got into 20 games, all in relief, posting a 4.91 ERA.