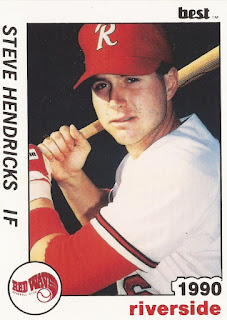 Steve Hendricks was even surprised by his start, he told The Spokane Spokesman-Review in July 1987.

Through 21 games for the short-season Spokane Indians, Hendricks carried a .400 average, had 24 RBI and a 17-game hitting streak, The Spokesman-Review wrote.

"I'm getting good breaks right now," Hendricks told The Spokesman-Review. "I hope I can continue to get them. I know the streak is going to end. When it does, I'll just try to start another."

Hendricks kept it up long enough to win league MVP honors that year. He couldn't keep it up enough to make the majors. He eventually made AA, but he didn't make it higher.

Hendricks' career began that year in 1987, taken by the Padres in the 28th round of the draft out of U.S. International University.

Hendricks then started his career at Spokane. He hit a healthy .356 over the season, along with nine home runs and he had 75 RBI. Hendricks made the league All-Star team and won MVP honors.

He had three singles and three RBI in one late-June game. Days later, he knocked two home runs in one game.

"I was looking curve ball both times," Hendricks told The Spokesman-Review after the two home run effort. "Both times he hung it over the plate."

Hendricks' final pro time came in 1991 with the Red Sox at AA New Britain. He hit .211 in 100 games there. He then rounded out his career four years later with two seasons in independent ball. He played in the Western League both seasons, hitting .284 and .278, ending his career.