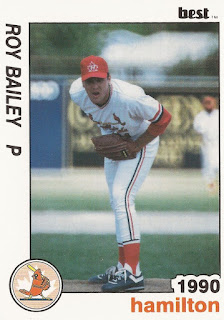 Roy Bailey coached in American Legion ball and, in 2010, he extended coaching resume to include Martha Layne Collins High School in his Kentucky hometown, according to The Shelbyville Sentinel-News.

"I enjoy working with kids. I enjoy the game," Bailey told The Sentinel-News. "I've learned from some of the best players and coaches over the years."

Bailey turned to coaching after a four-season professional playing career with the Cardinals. Bailey made it to high-A, but didn't make it higher.

Bailey's playing career began in 1990, signed by the Cardinals as an undrafted free agent out of the University of Kentucky.

He moved to single-A Savannah for 1991 and turned reliever. He also proved durable. He got into 73 games in relief, picking up eight wins and a 2.49 ERA. He still held the South Atlantic League's record in 2016 for most games pitched in a season.

Bailey soon returned home to Shelbyville and started coaching. In 1998, future major leaguer Jon Rauch cited Bailey, along with another American Legion coach in helping him along, according to The Louisville Courier-Journal.