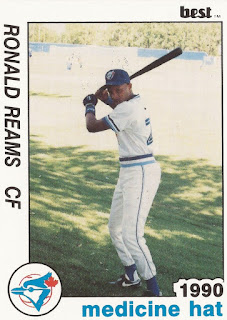 Ron Reams led the Texas-Louisiana in home runs and he showed it this night in 1994, according to Sports Radio Corpus Christi.

Reams hit a grand slam for his independent Corpus Christi club, helping them to a 15-4 win.

Reams went on to hit 19 home runs for Corpus Christi that year, his fifth season as a pro and first in independent ball. He'd made AA in the minors and went on to play in four more independent league seasons. He never made the majors.

Reams started his pro career in 1990, taken by the Blue Jays in the 18th round of the draft out of Laney College in California. He's also credited by his full name Ronald Reams.

He started with the Blue Jays at rookie Medicine Hat. He hit .243 over 48 games. He walked and scored in a July game against Salt Lake.

He moved up to AA Knoxville for 1993. He got into 97 games, hitting .227 with six home runs, ending his affiliated career.

After playing 1996 in the Western League for Grays Harbor and Salinas, Reams played 1997 with Adirondack. He singled and scored in one August game. He then knocked in the winning run in the 10th in another game that month on a double.