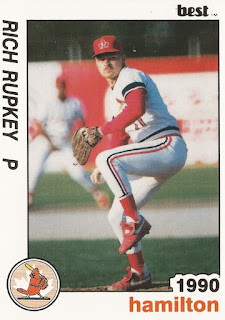 Rick Rupkey ran into some trouble late in this February 1989 game for UC-San Diego, but he got out of it, according to The UCSD Guardian.

Rupkey loaded the bases on a hit and two walks. He then came back to record a strikeout and then lock down the win, The Guardian wrote.

Rupkey went on from UC San Diego to turn pro. His pro career, however, turned out to be brief. He played just a single season.

Rupkey's pro career began and ended in 1990, signed by the Cardinals as an undrafted free agent out of UC San Diego. Rupkey is also credited as Rich Rupkey.

At San Diego, Rupkey picked up a win in another February 1989 game, striking out seven and walking seven, without allowing an earned run. He picked up a complete-game in a March 1989 win.