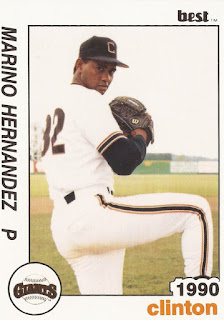 Marino Hernandez posed with his 1990 Clinton Giants teammates for the team photo, one of several photos spotted hanging in the Clinton team store in 2014.

Hernandez took a spot in the back row, fourth position from the right.

He posed for that photo in his third professional season. He also posed for it near the end of his professional career. Pitched in those three seasons and didn't return for a fourth.

Hernandez' career began in 1988, signed by the Giants as a free agent out of his native Dominican Republic.

Hernandez started with the Giants at rookie Pocatello. He got into 19 games, all in relief. He turned in a 5.16 ERA in 22.2 innings.

He returned to Pocatello for 1989 and also saw time at short-season Everett and single-A Clinton. Hernandez turned starter, getting into 21 games, starting 16. He went 4-6 overall, with a 6.52 ERA.