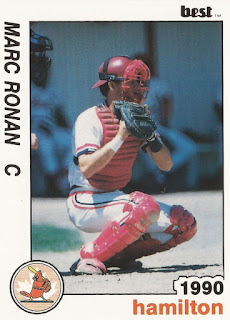 The Florida State Seminoles and Marc Ronan had a rare opportunity in March 1988 - play against a group of major leaguers in the Kansas City Royals, according to The Orlando Sentinel.

Ronan and his teammates tried to take advantage, talking with the pro players before the game, The Sentinel wrote.

"I just relaxed and had a good time," Ronan told The Sentinel. ''It was great meeting the guys you watch on TV all the time."

Ronan went on to a pro career himself. He even got to play on TV, if briefly. Ronan played a decade, making the St. Louis Cardinals in 1993 for all of six games.

Ronan's pro career began in 1990, taken by the Cardinals in the third round of the draft out of Florida State.

Ronan started with the Cardinals at short-season Hamilton. The catcher hit .228 over 56 games. He moved to single-A Savannah for 1991, hitting .236.

Ronan played 1992 at single-A Springfield, then 1993 at high-A St. Petersburg and AA Arkansas. That September, he got a call up directly to St. Louis.

"That was unbelievable," Ronan told The Louisville Courier-Journal later. "When (then-Arkansas manager) Joe Pettini told me I was going up, it took him 10 minutes to convince me he wasn't pulling my leg."

He debuted in the majors Sept. 21. He got into six games, picking up one hit in 12 at bats.

Ronan returned to the minors for 1994, playing at AAA Louisville. He hit .238. In his first five pro seasons, he never hit higher than that .238.