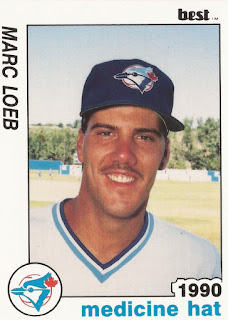 The scouts had a message for him, the catcher: not to worry about his bat, he told The San Bernardino County Sun that April.

"I don't feel any pressure because they tell me don't worry," he told The Sun. "I just play baseball. I'm a team player. If I could go through the season and we won every game without me getting a hit, I'd rather do that. No pressure at all. Most of them know I can hit."

Loeb's career began that year in 1989, taken by the Blue Jays in the sixth round of the draft out of San Bernardino Valley College.

Loeb finished that year with San Bernardino as the team's MVP. He started with the Blue Jays at rookie Medicine Hat.

He played 1992 with high-A Dunedin, but briefly. He got into 4 games. He then played that fall in Australia.