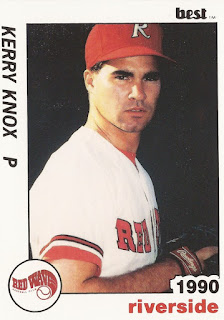 The Spokane Indians were on a slide in July 1989 and they needed starter Kerry Knox to step up and win, according to The Spokane Spokesman-Review.

Knox responded by coming through with a complete game six-hitter, The Spokesman-Review wrote.

"He's been my stopper all year," Spokane manager Bruce Bochy told The Spokesman-Review. "That's what we needed in a situation like we've been in, an outing like that."

Knox had that outing in his first season as a pro. He went on to play for nearly a decade. He made it to AAA, but he never got to play in the majors.

Knox' career began that year in 1989, taken by the Padres in the 18th round of the draft out of Texas Christian University.

Knox started with short-season Spokane. His performances gained much praise. In 12 starts, he went 8-2, with a 2.63 ERA. In early July, he threw seven innings of scoreless two-hit ball for the win.

"Kerry Knox - what can you say about him?" Bochy told The Spokane Chronicle then. "He throws well every time out."

Knox made AA Wichita in 1991. He went 4-4 there over 28 outings, 15 starts. That May, he threw a gem, no-hitting the Tulsa Drillers, according to The Tulsa World.

"I'm not a power pitcher by any means," Knox told The World. "I usually throw a lot of curves but I only threw five or six because of the seems on the balls didn't feel right to me. Maybe, I should keep throwing more fastballs and fewer curves."

Knox moved to the Brewers system for 1992, playing between single-A Beloit, high-A Stockton and AA El Paso. He played 1993 with the Cardinals, playing at AA Arkansas and AAA Louisville. He got seven starts at Louisville, going 1-4.

Knox returned to Louisville for all of 1994. He went 8-9 over 32 outings, 24 starts. It was his final full season in affiliated ball. He played three more seasons largely in independent ball, finishing out his career.