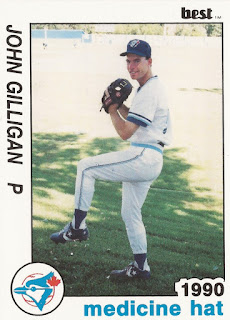 John Gilligan came on in relief in this June 1991 game and helped his Salt Lake club to a win, The Deseret News wrote.

He did so through strikeouts, according to The News.

"I was hitting my spots," Gilligan told The News afterward. "It had a good break on it and caught people fishing."

Gilligan caught a few people fishing that summer for the unaffiliated Salt Lake, going on to win the league ERA title. He couldn't catch enough to return to an affiliated team. He played four seasons and never made it beyond rookie ball.

At Southern Mississippi, Gilligan helped his club to the 1990 College World Series South Regional. In a mid-May game, Gilligan no hit Cincinnati for six innings before finally giving up some runs for the loss.

"Everything was going great," Gilligan told reporters afterward. "I was cruising along until I started steering pitches."

Gilligan started with the Blue Jays at rookie Medicine Hat. He got into 18 games, starting two. He went 1-6, with a 2.75 ERA.

Gilligan didn't return to the Blue Jays system for 1991. Instead, he signed with independent Salt Lake. He struck out three in the ninth inning of one July win and gave up a game-deciding double in another. He went 6-1 overall, with a 1.71 ERA. He saved six.