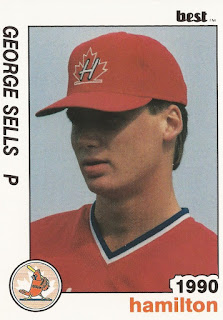 George Sells helped his Old Dominion Monarchs in 1990 as a hitter, as well as a pitcher, according to The Newport News Daily Press.

By early April, Sells amassed 20 strikeouts in 20 innings, turning in a 2.70 ERA, The Daily Press wrote. At the plate, a hot start meant a slump dropped dropped his average all the way to .373.

Sells' mound work, however, is what caught scouts eyes. He went on to turn pro that June, but his professional career didn't last long. He played only a single season, never making it to AA.

Sells' career began and ended that year in 1990, taken by the Cardinals in the sixth round of the draft out of Old Dominion.

At Old Dominion, Sells' play won him first team Collegiate Baseball All-American in 1990. By mid-March, he led his team at the plate in six categories, including hitting and home runs. He knocked 42 RBI in 1989 and nine home runs in 1990, both leading his team.

He started with the Cardinals at short-season Hamilton. He got into six games there, starting five. He went 1-3, with a 5.40 ERA.