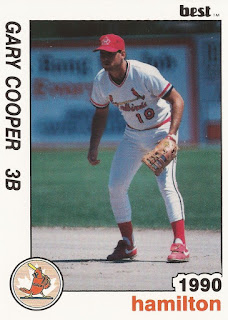 Gary Cooper readied to move on to college in 1986 and his high school baseball coach saw big things for him there, The St. Louis Post-Dispatch wrote.

"He's just an excellent outfielder with good speed and a good throwing arm. And be hits so well," Swift, head coach at the St. Louis-area Lafayette High, told The Post-Dispatch that April. "He has great work habits. He works hard at what he needs to do to improve."

Cooper worked hard enough to make the pros - twice. But he couldn't stay there. He played parts of two seasons. He never made single-A.

Cooper's pro career began in 1988, taken by the Angels in the 25th round of the draft out of Scottsdale Community College in Arizona.

Cooper initially played his college ball at the University of Missouri-Columbia. He moved to Scottsdale after a tough start in Columbia, The Post-Dispatch wrote.

He then returned to college, at Columbia. He also held out hope for a return to the pros, The Post-Dispatch wrote in June 1989.

"At the time, it was a dream come-true," Cooper told The Post-Dispatch of his first pro stint, as he worked to return. "But I'm still hopeful. If I didn't think there was a chance to be re-signed, I probably wouldn't be playing now."