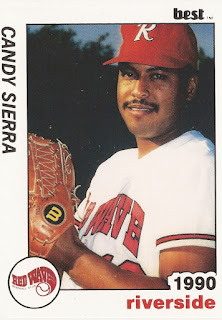 One Padres rookie made the team out of spring training 1988. The other didn't.

Sierra's career began in 1983, signed by the Padres as a 16-year-old free agent out of his native Puerto Rico. Sierra was also known by his given name, Ulises Sierra.

Sierra started with the Padres at short-season Spokane. The hurler got into 23 games in relief, posting a 5.35 ERA. He moved to single-A Reno for 1984. He went 11-4 there, with a 4.46 ERA, serving as a starter and as a reliever. He also threw a seven-inning no-hitter against Modesto.

Sierra struck out six batters in four innings of work in one spring 1988 contest against Milwaukee. He made the big club. His debut came April 6. Coming on in relief, he gave up a hit that scored an inherited runner. He then loaded the bases in the next inning, but got out of it with a double play.

In a game May 3, Sierra gave up a home run to the Cubs' Andre Dawson, among four earned he gave up in an inning of work. Overall, Sierra got into 15 games for the Padres, posting a 5.70 ERA.

Then, in early June, the Padres sent Sierra to the Reds for Dennis Rasmussen. Sierra got into one game for the Reds, then the Reds sent him down to AAA Nashville. He never made it back to the majors.

His 1989 season consisted of three starts at AA Chattanooga. He then returned to the Padres for 1990, playing between high-A Riverside and AAA Las Vegas. His final pro time came in 1991 with the Cubs at AA Charlotte.