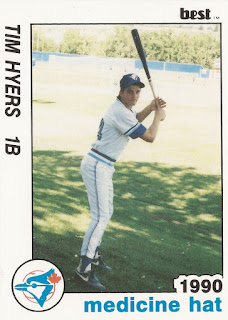 Tim Hyers saw his hitters as each having their own style, he told Dodger Insider in March 2016.

His job, the new Dodgers assistant hitting coach told Dodger Insider, is to understand their swings.

"And it's not my swing, it's their swing," Hyers told the site. "You want to get to know them as a person and a player. Be the eyes for them. That’s what I try to do — get to know them, understand and work within the framework of their swing."

Hyers worked on those swings with the Dodgers after his own career in the pros that also led him to the majors. On one major league night, he swung well enough to hit two home runs - the only home runs of his big league career

Hyers' career began in 1990, taken by the Blue Jays in the second round of the draft out of Newton County High School in Georgia.

Hyers with the Blue Jays started at rookie Medicine Hat. He moved to single-A Myrtle Beach in 1991 and AA Knoxville in 1993.

He moved to the Padres for 1994 and made the jump to San Diego in early April. He got into 52 games for the Padres, hitting .254. He returned to San Diego for 1995, getting into six more games.

"I took a chance," Hyers told Florida Today. "I was going home. I didn't have a lot of offers, but John Boles called my agent and they worked something out."

Hyers returned to the majors for the best of his four campaigns. He got into 58 games, hit .222 and knocked in 12. He also hit his first and second major league home runs in the same June game against Tampa Bay.