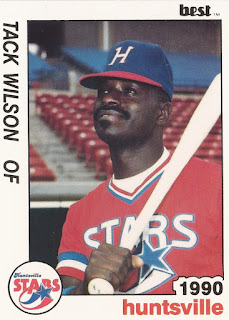 Going into his eighth pro season in 1983, Tack Wilson received news from two team officials, his AAA manager and the Dodgers farm director and the news was bad, according to The New York Times Magazine.

Both informed the minor league veteran that they didn't see Wilson as a big league player, Wilson told The Times Magazine.

"If something doesn't happen for me this season," Wilson told The Times Magazine, "that'll be it. At my age it's do or die. A person can only take so much."

Wilson soon received some new life in the form of a trade. Arriving with the Twins, the club brought him up to Minnesota for his big league debut. His reprieve, though, was short-lived. He his time in the bigs that year turned out to be brief.

Wilson ultimately decided to stay in the game, making another brief appearance in 1987 with the Angels. Wilson didn't stop playing until 1990, spending one final season at AA with the Athletics at the age of 34. In all, he saw time in 12 big league games, amassing all of two major league hits.

Wilson's career began in 1975, signed by the Dodgers as an amateur free agent out of Laney College in Oakland.

He started at short-season Bellingham in 1976. He made AA San Antonio in 1979 and then AAA Albuquerque in 1980. He stayed at Albuquerque for three seasons, hitting .378 in 99 games in 1982, without seeing Los Angeles.

After his trade to the Twins, Wilson debuted April 9, 1983. He got into five games, picking up a hit in his third appearance, second against his hometown Athletics.

He signed with the Angels for 1987. That September, he explained to The Los Angeles Times the origins of his nickname "Tack" - after the clothing he wore in rookie ball - and Angel manager Gene Mauch explained what he saw in Wilson.

"He can shag the ball with anybody," Mauch told The LA Times, "he doesn't throw it so well once he catches it, he can run."

Wilson got a September call up in 1987, getting into seven games. He picked up one more hit, ending his big league career.

Wilson played three more seasons in the minors, briefly at AA with the Rangers in 1988, with the Rangers and Brewers at AAA in 1989 and with the Athletics at AA Huntsville in 1990. He also played in the Senior Professional Baseball League.