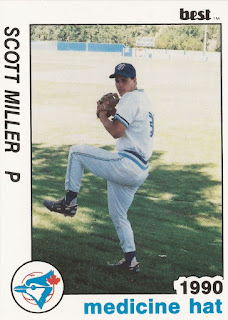 Scott Miller spent much of his time in college as an infielder. As a pro, Miller would make the switch to pitcher, according to his hometown Tyrone Daily Herald.

Miller, though, had the stuff to get himself a long career, whatever position he played, Pennsylvania-based scout William "Keno" Beezer told The Daily Herald.

"Scott threw around 87 miles per hour in high school here and he's matured some since," Beezer told The Daily Herald. "He's a great power hitter with excellent hands. Really, he could have gone either way — as a pitcher or an infielder."

Miller started his career that season at rookie Medicine Hat. He also ended it that year, too. Miller's career lasted just that single season.

Miller joined the Blue Jays, having been selected by the club in the 34th round of the 1990 draft out of Elon University in North Carolina. Before that, Miller grew up in Morrisdale, Pa. His fuller name is listed as Scott A. Miller.

In Pennsylvania, Miller played for the L.S. Fiore AAABA team in Altona, according to The Daily Herald. In August 1989, Miller was cited by The Altoona Mirror as hitting .306 for Fiore. His coach noted to The Mirror that Miller made another switch, from shortstop to third base, a switch he made for the good of the team.

By that point, Miller had already played the spring with Elon University, a school he returned to for 1990.

In May 1989, Miller played with Elon at the NAIA World Series in Kansas. In one game, Miller knocked in a run on a single. He also committed a couple costly errors in the Elon loss, according to The Lewiston Morning-Tribune. He went 1 for 4 in another game.

Miller led his team in home runs that year, with 9 and 12 in 1990. In 1990, Miller led his Elon team in hits, with 62 and RBIs, with 51. He also made second-team All-South Atlantic Conference, according to the Elon record book.

Miller then turned pro. With the Blue Jays, Miller was sent to rookie Medicine Hat. As a pitcher, he got into 19 games, all in relief. Over 22.2 innings of work, Miller gave up just three earned runs, for a 1.19 ERA. Despite his success, it was Miller's only season as a pro.