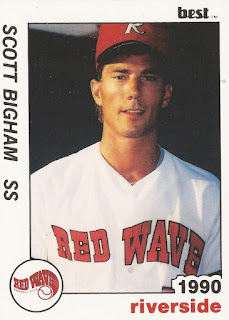 Scott Bigham went into his pro career without any great expectations, he told The Spokane Spokesman-Review in August 1988.

"I said I'd take it day by day, have as much fun as possible and give 100 percent to it," Bigham told The Spokesman-Review. "That way, when my baseball career's over, I can look in the mirror and say I tried as hard as I could."

Bigham had much fun that first year for Spokane. He hit .334 over 76 games and knocked in 38. Bigham tried hard from there, but he couldn't match those first-season stats. He played two more seasons. He never made AA.

Bigham's career began that year in 1988, taken by the Padres in the 22nd round of the draft out of Willamette University in Oregon.

Bigham started with the Padres at Spokane and he started hot. That start continued in mid-July, according to The Spokane Chronicle.

In late August, Bigham played with a broken finger and went 4 for 5, scoring the winning run in a game. Overall, Bigham knocked 105 hits in 314 at bats in 1988.