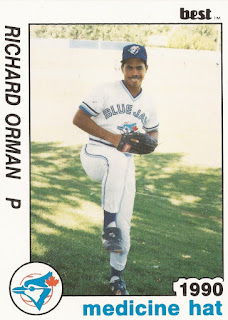 Richard Orman made the jump to another league soon after his brief minor league career concluded.

He also became somewhat of a star.

A native of Aruba, Orman played a single season in the minors with the Blue Jays, entirely in rookie ball. However, by 1993, he'd made the jump to the Netherlands.

Playing baseball, or Hoofdklasse Honkbal, he eventually played nearly 20 seasons and amassed the most wins buy a lefthander in that league's history, 123 by 2009.

Orman's career in baseball began in 1989, signed by the Blue Jays out of his native Aruba.

Before joining the Blue Jays, Orman played for the Aruban national team in 1987 at the Pan American Games and the International Cup, according to Baseball-Reference's Bullpen.

Orman started with the Blue Jays in the Dominican Republic, earning MVP of his team, according to his Best card. The card also notes he graduated as a mechanical engineer from the school MTS Cesare Terzano.

Orman moved to the Netherlands in 1993, joining the Pioniers. He played 16 seasons with that club, before retiring and becoming a coach.