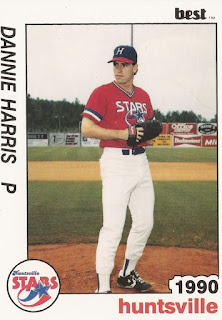 A star at Jacksonville High School in Arkansas, Ray Harris went on to play in college and in the pros.

When inducted into the high school's Hall of Fame in 2009, though, he looked back at the American Legion state championship he and his teammates won in 1984, according to The Arkansas Leader.

"That was the funnest time I ever had," Harris told The Leader. "I think what really makes it special is it's the guys you grew up with, the guys you went to school with since fourth grade, the guys you played Legion with and all-stars and Babe Ruth."

Harris started his pro career four years after that Legion win. His pro career lasted just three seasons. He made AA, but he didn't make it higher.

Harris turned pro in 1988, taken by the Athletics in the 22nd round of the draft out of the University of Arkansas. Harris is also sometimes credited by his given name Dannie Harris.

At Arkansas, Harris helped the club to two College World Series. He also pitched in 261.2 total innings over his four years at the school, good for ninth all-time at Arkansas.

Harris started with the Athletics at short-season Southern Oregon. He went 4-4 over 16 games, eight starts. He moved to single-A Madison for 1989, going 6-10 over a season as a starter.

Harris moved up to AA Huntsville in 1990. That May, he took on Orlando and gave up three hits after the second inning for a win, according to The Orlando Sentinel.

"We were kind of baffled that he was doing such a good job," Orlando right fielder Kenny Morgan told The Sentinel of Harris. "He kept the ball middle in and even tried to pitch me in, and I was swinging at pitches that really weren't strikes."