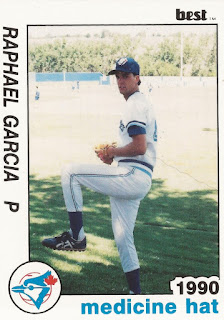 Raphael Garcia went deep in this March 1990 game for Southern California College - and he did so without giving up a hit, according to The Los Angeles Times.

Garcia, however, couldn't make it the entire way for the no-hitter, The Times wrote. He gave up three hits and a run in the final frame while still picking up the win.

Garcia went on to turn pro later that year. His pro career lasted three seasons. He never made AA.

In an April 1990 college game, Garcia gave up more hits, six, but still struck out nine and picked up the win. He also picked up three hits himself.

Garcia started with the Blue Jays at rookie Medicine Hat. He went 3-5, with a 5.05 ERA in 13 outings eight starts.