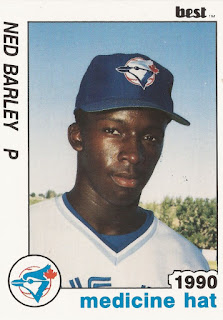 Years after his selection by the Blue Jays in the 1990 draft, Ned Darley recalled to The Manning Times the influence of his coaches on getting him and a couple of his teammates there.

"No one knows the amount of sacrifices you and the coaches make behind the scene to make us better ballplayers, as well as better men," Darley told The Times.

Darley went on to make many sacrifices - and work with many coaches - over his professional career. After starting his career in 1990, he didn't stop playing until nearly 20 years later, 2008. He never made AA in the minors, but he extended his career in independent ball and elsewhere.

Darley began that year in 1990, taken by the Blue Jays in the 11th round of the draft out of Manning High School in Manning, S.C. Darley's name is misspelled on his Best card as Ned Barley.

Darley started with the Blue Jays at rookie Medicine Hat. He went 0-4, with a 4.71 ERA. He then returned to Medicine Hat for 1991, then moved to short-season St. Catharines in 1992.

At St. Catharines, Darley went 4-5, with a 2.94 ERA over 16 outings, 14 starts. In a Sports Illustrated feature on the club's general manager, Ellen Harrigan-Charles, the story notes one performance where Darley set down 17-straight batters.

Harrigan-Charles recalled Darley later on a trip to Toronto, when Blue Jays hurlers turned in a poor outing.

Darley moved to single-A Hagerstown and high-A Dunedin for 1993. He threw seven innings with Dunedin in an August win. He played with the Reds at high-A Winston-Salem for 1994.

He got his first look at independent ball in 1995 with Bend, making the league All-Star game. His last extended time in the minors came in high-A High Desert with the Orioles.

Darley played in independent ball nearly every season for the next decade. He played in Taiwan in 1999 and returned in 2002. He picked up his 14th save in an August 2002 game for Taichung Agan to lead the league.