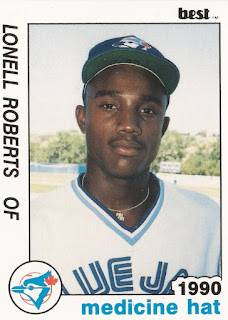 "I'm pretty excited about it," Roberts told The Sun. "I kind of knew I was going to get drafted, but I wasn't sure by who and how high."

The Blue Jays selected Roberts in the eighth round of the draft, sending Roberts on to start his career at rookie Medicine Hat. He went on to play for more than a decade, making AAA, but never making the majors.

Roberts signed with the Blue Jays that year in 1989 and then played 29 games for Medicine Hat. He hit .141, with six RBI.

Roberts moved to single-A Myrtle Beach for 1991, then short-season St. Catharines and briefly AA Knoxville for 1992.

Roberts didn't get regular time at AA until 1995, after going through single-A Hagerstown and high-A Dunedin. In June 1994 for Dunedin, Roberts went 2 for 4, with a double.

To start the 1997 season, though, Roberts became part of an unusual trade, traded essentially for himself. Sent to the Rangers that spring, the two clubs couldn't agree on the player to be named later as compensation. The Rangers then had to send him back, Roberts completing the trade by returning to the Blue Jays.

Roberts did move systems for 1998, to the Braves. He played that year at AA Greenville and the next at AAA Richmond. He hit .262 over that year at Richmond, marking the end of his career.