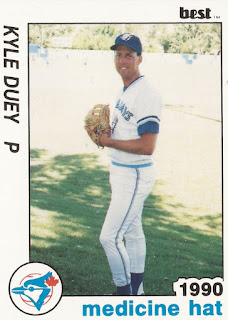 Pressed into the starting rotation for the independent Amarillo Dillas in this July 1999 game, Kyle Duey shined, according to The Amarillo Globe-News.

Duey went into the ninth, striking out 10 and walking just one in the 3-2 win, The Globe-News wrote.

"Duey was awesome," Amarillo catcher Chris Anderson told The Globe-News afterward. "That's a lot fun to catch a pitcher like that. He hit his spots all game."

Duey hit those spots in a return to pro baseball after several seasons away. Duey played five seasons in the minors, mostly with the Blue Jays. He made AAA, but didn't make it higher. That 1999 campaign marked his sixth and final year in the pros.

Duey's pro career began in 1990, taken by the Blue Jays in the 32nd round of the draft out of the University of Portland.

At Portland, the reliever Duey saved seven games in 1990, still tied for seventh all time at the school. He also appeared 30 times that year, the fourth most at the school.

Duey started with the Blue Jays at rookie Medicine Hat. He took the loss in a July game against Salt Lake. He went 4-6 overall, with a 3.86 ERA in 15 outings, 11 starts.

He moved to single-A Myrtle Beach in 1991, as well as high-A Dunedin. He played all of 1992 at Dunedin in relief. He picked up seven wins and seven saves. He picked up his second save with an inning of work in a May game.

Duey hit AA Knoxville and then AAA Syracuse for 1993. He got into 11 games at Syracuse, picking up two wins and a save.

He started 1994 back at Knoxville and Syracuse before jumping to the Astros and AA Jackson. His final affiliated time came at the beginning of 1995 at Jackson. He then played out the year for Amarillo. He went 6-4, with a 3.24 ERA.

After three seasons where he isn't credited as playing, Duey returned to Amarillo for 1999. In another July game that summer, Duey helped touch off a brawl by hitting a rival hitter after a home run. He explained to The Globe-News afterward, the plunking served notice for sign stealing, not the home run.

"We battled out there," Duey told The Globe-News. "It was a good game."