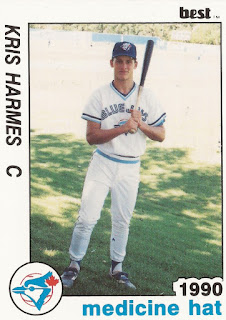 In a feature on his team that July, Harmes expressed to Sports Illustrated his realization of exactly where he stood.

"I have so much to learn," Harmes told SI. "I was pretty good in high school, but here I feel so raw."

Harmes learned enough to play in seven seasons. He played them all in the minors. He reached AA, but not higher.

Harmes' career began that year in 1990, taken by the Blue Jays in the 36th round of the draft out of Donegal High School in Mount Joy, Pa.

Harmes recalled to Lancaster Online years later his high school coach Al Harmes and his impact on Harmes and teammates.

"He taught us more than just baseball," Harmes said, according to the site. "He taught us how to be men — how to take responsibility, how to work with one another through the good and the bad."

With the Blue Jays, Harmes started at Medicine Hat and got some time at short-season St. Catharine. Between them, he got into 53 games and hit .274.

Harmes played all of 1993 at single-A Hagerstown. That spring, he made the Blue Jays spring training roster. He made the league All-Star team that July.

Harmes first made AA Knoxville in 1995. He returned there for 1996, marking his final season as a pro.