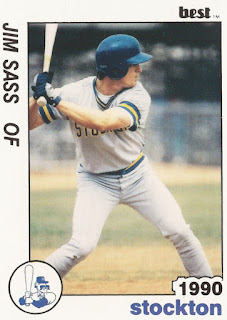 James Sass earned a new job in 2014 and it was a job that others might envy, according to Baseball America.

The longtime employee at Louisville Slugger, won the position of director of professional baseball sales, according to Baseball America, matching major leaguers with the right bats.

"Using the word 'job' is probably not the right term," Sass said with a chuckle, according to Baseball America.

The Louisville native Sass started with his hometown Louisville Slugger after a short career as a player himself. Sass played three seasons in the Brewers system. He made high-A Stockton, but never made it higher.

Sass started his playing career in 1989, signed by the Brewers as a free agent out of the University of Notre Dame.

He started with the Brewers at rookie Helena and in the rookie Arizona League. He hit .254 overall that year, with one home run and 25 RBI.

Sass soon found his way back home and he signed on with Louisville Slugger. In May 2015, in his role as director of professional bat sales, Sass spoke about the practice of major leaguers swinging pink bats on Mother's Day.

"In 10 seasons, more than 5,000 MLB game-model pink bats have been swung on Mother's Day in honor of those who have been diagnosed or affected by breast cancer," Sass said in a press release. "It's remarkable now to see how pro players, the baseball community and the fans have embraced this effort and pushed it to new levels each and every year."