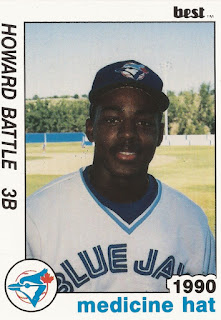 Deep into his professional career, Howard Battle made a difference - in the majors.

Coming up as a pinch hitter for the Braves late in a September 1999 contest, Battle provided the game-winning single to left, The New York Daily News wrote.

"This is a dream come true for me," Battle told The Daily News afterward. "I've been in the minor leagues for 10 years. Next thing I know, I'm pinch-hitting in the middle of a pennant race."

Battle had seen the majors twice before, both for brief stints. He not only saw the majors in 1999, but he also saw the postseason.

Battle's long road to that realized dream began in 1990, taken by the Blue Jays in the fourth round of the draft out of Mercy Cross High School in Mississippi.

He played his first season at rookie Medicine Hat. He'd signed after turning down a football scholarship to Tulane. He had a tough game early, booting three balls at third.

He made his major league debut in September 1995 with Toronto. He got into nine games down the stretch, going 3 for 15. He returned to the majors in 1996 with the Phillies, getting into five more games.

But his biggest break, as brief as it was, came in 1999 with the Braves. He'd spent 1997 and 1998 back in the minors. He returned to the bigs with Atlanta that August.

He got into 15 games for the World Series-bound Braves, going 6 for 17. He also made the post-season roster for his right-handed bat. He saw brief time in each round, including Game 1 of the World Series.

"People thought I was crazy when I signed back with the Braves last winter," Battle told The Athens Banner-Herald. "I didn't want to take Chipper Jones' job, I just wanted an opportunity to play everyday at Triple-A and that's what I got."

Battle moved to Japan for part of 2000, playing for Hanshin. He picked up two hits in one game there and homered in another.

He returned stateside by 2001, playing in the minors and independent ball for his final three seasons. Playing for independent Gary in 2003, Battle looked back on his career.