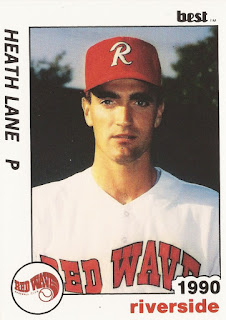 With three professional seasons behind him, Heath Lane had a choice to make, he told The Stockton Record years later.

He could take an offer to play another year at high-A, or he could move on, he told The Record.

"I decided to do other things, but you do second-guess decisions like that," Lane told The Record in 1999. "There are times you wonder whether you should have pursued baseball a bit longer. But I made a decision."

Lane's decision sent him on to a career as a teacher and a coach in high school.

Lane's first career as a baseball player began in 1988, taken by the Brewers in the 16th round of the draft out of the University of Arizona.

Lane went to Arizona out of Stockton's San Joaquin Delta College and the Stockton-area's Linden High School. He pitched San Joaquin to a win in April 1986 after signing to go to Arizona.

Lane started with the Brewers in 1988 at rookie Helena. He went 8-4 over 16 games, eight starts, at Helena with a 3.30 ERA. He worked into the seventh inning in a July win against Salt Lake. Lane also got a game at single-A Stockton.

"It's a big loss for us," Bret Harte athletic director Cathcart told The Calaveras Enterprise after the move. "He's very knowledgeable about baseball and he's an outstanding coach. He's taken the baseball program a long way and has put in a lot of time of effort."

Lane later returned to Bret Harte, serving there as athletic director in 2013.