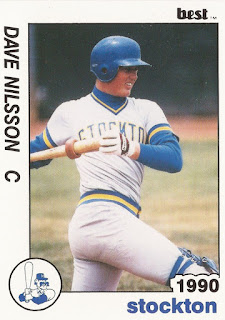 Dave Nilsson had just one home run on the year by mid-May 1996. In one game that month, he hit two more.

Make that two in one inning: Nilsson hit two home runs in the sixth inning of a game at Minnesota. He became the first Brewer to do so, according to The Associated Press.

"You never think about doing that," Nilsson told The AP afterward. "I've had two hits in an inning before, but nothing like that."

Nilsson went on to do a lot of things in his baseball career. He hit a total of 105 major league home runs. He made and Aill-Star team. He also represented his home country of Australia in the Olympics and even made an attempt to run a baseball league there.

Nilsson's career in baseball began in 1987, signed by the Brewers as a free agent out of Brisbane, Australia.

He caught the eye of the Brewers after coming to the United States and playing for a semi-pro team in Chicago, according to The Milwaukee Sentinel.

"He hadn't played that much baseball, but he had natural ability," Brewers scout Bill Castro told The Sentinel. Castro spotted Nilsson. "You could see he was above the rest of the team."

Nilsson debuted May 18. A month later, he had a successful road trip where he hit .296, according to The Sentinel. Nilsson felt optimistic.

"I feel secure that if I keep working hard and keep the right attitude that I can stay in the big leagues for a while," Nilsson told The Sentinel.

Nilsson got into 51 games that year, hitting .232 overall. He then became a Brewers regular. Over the next seven seasons he played in more than 100 games in six of them. He also hit over .300 twice and hit double-digit home runs six times.

He then spent time in 2000 in Japan. He left the Brewers so he could ultimately play in his home country, in the Sydney Olympics.

Nilsson has since returned to the new Australian baseball league. He serves in 2015 as manager of the Brisbane Bandits.