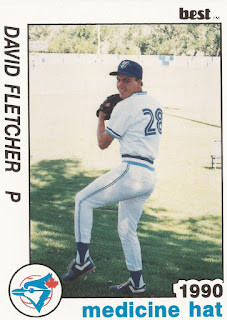 The San Bernardino County Sun described Dave Fletcher's performance on the mound in this May 1988 game as devastating.

Fletcher struck out 17 for Yucca Valley High School, throwing a five-hitter in the win. He even added four RBI at the plate, The Sun wrote.

Fletcher went on from Yucca Valley to play in college and in the pros. His pro career, however, ended up being brief. He played in just three professional games.


Fletcher's pro career began and ended in 1990, having been taken by the Blue Jays the year before in the 62nd round of the draft out of Mount San Jacinto College.

The Royals first selected Fletcher out of high school, taking Fletcher in the 45th round.

At Yucca Valley, Fletcher hit a home run in an April 198 game. Fletcher picked up two RBI in another May 1988 contest.
Fletcher then went on to Mount San Jacinto and to the Blue Jays.