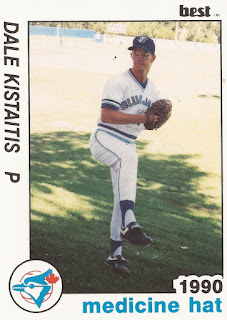 He remains in his college's record book for an unwanted stat, losses. In his state's high school football record book he remained the record holder for a wanted category, amassing 12 interceptions on defense in 1984.

Kistaitis went on to a pro baseball career, but he had little time to set records there. He he played just two seasons with the Blue Jays. He briefly made high-A, but no higher.

Kistaitis' pro career began in 1990, taken by the Blue Jays in the 29th round of the draft out of the University of Nebraska. He went to Nebraska out of Ralston High School in Ralston, Neb.

Kistaitis set the Nebraska Class A interception record in 1984. The record still stood in 2016, only equaled once.

At Nebraska, Kistaitis lost seven games in 1989, still tied for second most overall in a season at the school. His four saves in 1988 marked a team high that year.

For 1990, Kistaitis got a late start over grade issues. He picked up a win in his first start, going all seven innings against Iowa State.

He moved to single-A Myrtle Beach for 1991, getting a game at high-A Dunedin. Overall, he got into 20 games, two starts. He turned in a 4.32 ERA, ending his pro career.