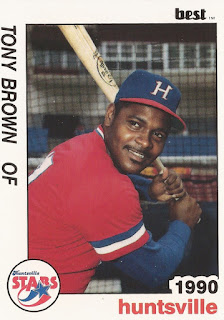 Tony Brown fueled the Tidewater Tides in this May 1989 game, knocking three hits and scoring twice, according to The Newport News Daily Press.

He picked up those hits after a 10-at-bat stretch where he picked up no hits, The Daily Press wrote.

"I wasn't too concerned, because I had been hitting the ball hard," Brown told The Daily Press of his hitless streak. "But sometimes when you hit the ball hard it goes right at someone."

Overall, Brown hit the ball in 10 professional seasons. He never hit it hard enough to make the majors. He made it as high as AAA, but no higher.

Brown's career began in 1982, signed by the Phillies out of his native North Carolina.

Brown started with the Phillies at short-season Bend. The outfielder hit .312 over 51 games. He moved to single-A Spartanburg and Peninsula for 1983. He knocked in a run on a single and another on a home run in an August game for Spartanburg.

Playing for Reading in June 1988, Brown became a home run hitter. After never hitting more than 12 home runs in a season, Brown hit four in one day. He hit two in each end of a double header against Albany, winning league Player of the Week honors.

Brown even predicted his home run feat, former teammates recalled years later. He bet $100 the night before that he'd do it and he did it, according to a 2016 Reading video.

"I didn't see him swing and miss," former teammate Shane Turner said in the team video. "Everything that he took was a ball. When he swung, the ball was hit hard - and mostly out of the park."