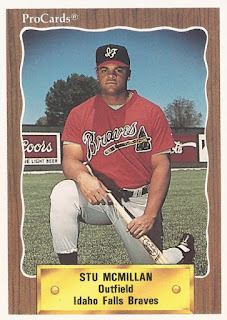 Stu McMillan made a regional team of top amateur talent in 1987 and he explained to The Cincinnati Enquirer the team's general mood.

"We're relaxed," McMillan told The Enquirer that June. "We're not worried about making a mistake, and we go for the big plays. It's not like when you're in Knothole or high school ball."

McMillan went on from that team and from Withrow to make the pros. His pro career, however, ended up being brief. He played two seasons, both in rookie ball.

McMillan's pro career began in 1989, taken by the Braves in the seventh round of the draft directly out of Withrow. McMillan is also sometimes credited by his full name, Stuart McMillan.

With the Braves, McMillan started in the rookie Gulf Coast League. He got into 25 games, all in the outfield. He hit .164 and no home runs.