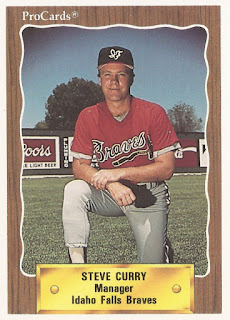 Idaho Falls manager Steve Curry took a risk in this July 1991 game and it paid off, according to The Deseret News.

Faced with an opposing Salt Lake hitter who hit well against Idaho Falls, Curry ordered the batter walked - placing the tying run on base late, The News wrote. A grounder later and Idaho Falls had the win.

"That's not what you're supposed to do," Curry told The News after the win. "But it's tough to win here going nine innings, much less extra innings, so you throw everything at them."

Curry threw everything he had into a decade-long playing career and a shorter post-playing career as a minor league coach and manager. However, he never came through with a call to the bigs. He played as high as AAA, but not higher.

Curry's career in baseball began in 1977, taken by the Phillies in the 26th round of the draft out of Scottsdale Community College in Arizona.

Curry started with the Phillies at rookie Pulaski. He hit .283 in 69 games. He then moved to single-A Spartanburg for 1978, then hit AA Reading briefly in 1979.

Curry played all of 1980 in Reading, hitting .318, with 20 home runs. The Reading Eagle remembered his time there years later, naming him to the club's Golden Anniversary team in 2016 for his season there.

He moved to the Braves system for 1981, playing 68 games that year at AAA Richmond. Curry played parts of four seasons total in Richmond, including 104 games there in 1985. In between, he played at AA Savannah and Greenville.

Curry's final playing time came in 1986 with 55 games at Greenville and four at Richmond.

He then started his coaching career by 1989, signing on with the Braves as hitting coach for single-A Burlington. He took his first managerial job in 1990 at rookie Idaho Falls.

Curry helmed the Rookie League All-Star team that year. In August, his team went on a run of 13 wins in 14 games, then ran into a 14-4 loss, The News wrote.

"I hope we got it all out in one game," Curry told The News afterward. "We did about everything wrong we could do in a game."