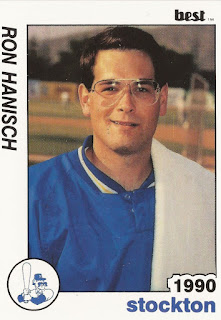 About to set out into the world of sports trainers in 1988, Ron Hanisch explained in his college yearbook how trainers should know success.

"It seems like if you're a good trainer," Hanisch said in the 1988 University of Idaho yearbook, "you'll go unnoticed."

Hanisch went on from the University of Idaho to try and go unnoticed as a trainer in the minors. After several seasons in the Brewers and Astros systems, Hanisch worked to make a name for himself in another field, cooking.

In the cooking field, Hanisch worked in several restaurants in the Seattle area, until his passing in 2012 at the age of 47.

Hanisch's career as a trainer began in 1988, signing on with the Brewers out of Idaho.

Hanisch started at rookie Helena, moving to single-A Beloit in 1989. His 1989 Star card lists big game hunting among his hobbies. His Cal League card adds golfing and fishing to that list. That card also lists him as playing some college baseball at St. Mary's University in Kansas.

Hanisch jumped to the Astros system and single-A Asheville for 1991. He stayed there for three seasons, continuing through 1993.

Hanisch soon settled in Seattle and became a sous chef, working at the restaurants Canlis, Newcastle, the Space Needle and Salty's on Alki, according to his 2012 obituary.