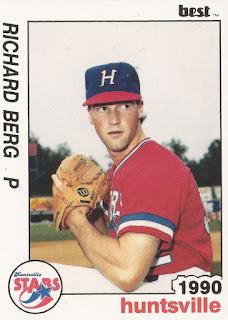 Rich Berg pitched well enough in this June 1989 game, but he still took the loss, according to The Greenwood Index-Journal.

The Huntsville hurler went 2.1 innings against Greenville. He gave up one run and just two hits, struck out three and walked one.

Berg played that year in his third season as a pro. He got into two more. He never made it higher than AA.

Berg's career began in 1987, taken by the Athletics in the 12th round out of LeMoyne College in Syracuse. He went to Syracuse out of Corinth, NY. Berg is also credited by his full name, Richard Berg.

Berg played at LeMoyne for four years, from 1984 to 1987. He then signed with the Athletics, playing his first season between short-season Medford and single-A Modesto.

Berg went 3-3 over that first campaign. He then returned to Modesto for all of 1988. In 34 relief outings, Berg picked up two wins and one save and earned a 4.39 ERA.