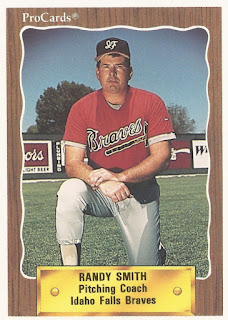 The Arkansas-native had a long career in the game. He played, coached and scouted in the pros. He'd also coached in high school, working with youth, according to The Courier News.

"You're not going to find a person in this state with the experience and wealth of knowledge like Randy Smith," Hixson told The Courier News upon Smith's hire in 2012. "He's a phenomenal teacher. He teaches in a way that can make kids better... He knows what he's getting into. I think he can jump start this program and build it to one that we can all be proud of."

Smith's long career in baseball began more four decades earlier as a player, taken by the Angels in the first round of the January 1973 draft out of Three Rivers Community College in Missouri.

He made AA El Paso for 11 starts in 1976 and finished out his playing career at single-A the next season.

Smith later returned to the pros as a coach. In 1989, he rejoined the Angels as a coach at rookie Idaho Falls. He stayed at Idaho Falls through at least 1991.

In 1995, he took head coaching job at Senath-Hornersville High School in Arkansas. He even returned to the pros briefly in 1999 and 2000 as coach at short-season Spokane.

He continues as head coach with Blytheville in 2016. In March 2013, Smith tried to make sense of a Blytheville loss to The Courier News.