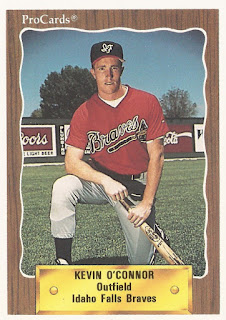 Kevin O'Connor had some decisions to make in summer 1987, according to The Los Angeles Times.

O'Connor could go pro and sign with the Cubs. He could head to his first-choice college, Cal State Fullerton. He also could wait and follow former Fullerton coach Augie Garrido to Illinois, The Times wrote.

"The decision he had to make was really weighing on him," O'Connor's high school coach Bob Ickes told The Times after O'Connor's initial decision to head to Fullerton. "You could tell he was bothered by it."

O'Connor eventually did follow his coach to Illinois. He also eventually turned pro. His pro career lasted six seasons. He saw AAA, but not the bigs.

O'Connor's pro career began in 1990, taken by the Braves in the 32nd round of the draft out of Illinois.

With the Braves, O'Connor started with rookie Idaho Falls. He got into 12 games and hit .234.