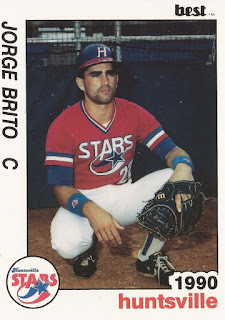 Jorge Brito took a look around the Rockies new home in Coors Field and he couldn't help but be awed, according to The Associated Press.

The backup catcher turned to a Spanish adage to describe the new baseball palace, The AP wrote.

Brito's sense of wonder could also likely be traced to something else: That he'd made a major league roster.

After spending almost a decade in the minors, Brito made the bigs in Colorado out of that abbreviated spring. He saw time in parts of two seasons, getting into a total of 26 games.

Brito's career began in 1986, signed by the Athletics as an amateur free agent out of the Dominican Republic.

Brito started with the Athletics at short-season Medford. The catcher played there his first two seasons, hitting under .200 both years.

He played at single-A Modesto for parts of the next three seasons. He also saw time at AA Huntsville and AAA Tacoma in 1989.

Brito knocked a game-winning hit in a June 1988 game against San Bernardino. He then opened the 1989 season back at Modesto, hitting a late three-run home run to extend a lead in a win over Reno.

"He served me up a fastball and I got all of the middle of it," Brito told The Reno Gazette-Journal afterward. "With two men on and no one out, I just wanted to hit the ball good and I did that."

For 1994, he signed with the Rockies as a free agent. He played that year between AAA Colorado Springs and AA New Haven.

Brito returned for another eight games in 1996, showing he could hit that spring with a three-hit performance.