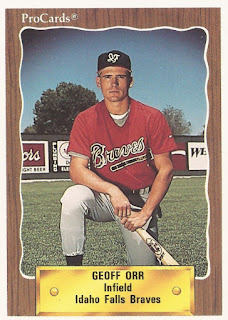 Geoff Orr helped get his Idaho Falls Braves, just not enough, according to The Deseret News.

In an August 1990 game against Salt Lake that Idaho Falls went on to lose 14-4, Orr knocked in one of the Braves' first two runs on a fifth-inning home run, The News wrote.

Orr hit a total of seven home runs for Idaho Falls in 1990 and two at single-A Macon the next year. Those round-trippers ended up being the extent of his professional home runs. He played just those two seasons, never making AA.

Orr's career began that year in 1990, signed by the Braves as an undrafted free agent out of the University of Arkansas-Monticello. He went to college out of Springhill, La.

Orr started with the Braves at Idaho Falls. He got into 67 games mostly at third. He hit .289, with those seven home runs and 39 RBI. He also swiped 11 bases. He knocked in one of his runs on a June single.