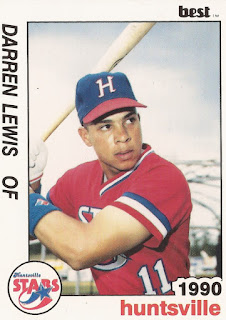 Runners on first and third, down by one and facing the Yankees' Andy Pettitte in this May 2001 game, Darren Lewis dropped down a bunt and it worked.

Lewis made it to first on what was scored a single and, more importantly, the run scored. Lewis tied the game for his Red Sox.

"I'm not a home run hitter," Lewis told reporters afterward. "You're not always going to bang one off that wall. Sometimes you've got to do what you do best and get on base. That's what I was doing there. I have to play my style, especially against Pettitte because he's not going to give you too much up there."

Lewis' style got him a career that spanned 13 major league seasons - more than 1,300 major league appearances. He hit .250 over his career, earned a Gold Glove one year for his play in the outfield - part of a record errorless streak - and hit a total of 27 home runs.

Lewis' career began in 1988, taken by the Athletics in the 18th round out of Cal State Berkeley.

Lewis started with the Athletics in the rookie Arizona League and at single-A Madison. He hit AA Huntsville briefly in 1989 and then Huntsville and AAA Tacoma in 1990. He also first saw Oakland that year, debuting in August.

Lewis got into 25 games for the Athletics in Oakland in 1990, hitting .229. He then moved to the Giants for 1991 in a trade and soon became a major league regular.

Lewis shined in the outfield early on. He started his career with 392 consecutive games without an error, then a record. He committed his first career error late in the shortened 1994 season and continues to hold the record for errorless games to start a career.

He closed out the second-to-last game of that 1994 year with a walk-off single in the ninth. He did so after a questionable call in a previous at bat, according to The Associated Press.

"I was really mad because I felt I wasn't given a chance," Lewis told The AP of that previous at bat. "I just tried to stay calm and not get caught up in the situation. The next situation I knew I had to be aggressive."

Lewis moved to the Reds in mid-1995, then to the White Sox and Dodgers. He arrived with the Red Sox for 1998 and stayed there for four seasons.

"I had three bad games. You have to take it in stride," Lewis told The AP afterward. "I got here early and went to the cage and got some extra work in. It paid off."