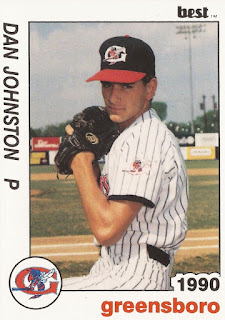 Prince William starter Dan Johnston pitched well enough for the win in this July 1991 game, according to The Newport News Daily Press.

Johnston went six innings and didn't give up a run. His bullpen, though, did, leaving Johnston with the no-decision.

For Johnston, that win would have helped. He went just 1-7 on the year in both starting and relief. That was his third season as a pro. He got into two more. He never saw AA.

Johnston's career began in 1989, signed by the Yankees as a free agent out of Creighton University.

Johnston came from a baseball family, The Daily Press wrote. His father Len Johnston played 16 seasons in the minors and later managed.

Dan Johnston played his first season in the rookie Gulf Coast League. In 16 outings, one start, Johnston went 4-2, with a 2.59 ERA.

In August 1991, Johnston pitched in the ninth inning with the bases loaded and one out. He ended the game by getting a double play.

Johnston played 1992 at high-A Fort Lauderdale. He got a June win, one of five the reliever got on the year. It was his last year in the Yankees system.

Johnston then moved to the Red Sox system for 1993. He got four outings at short-season Utica and 20 at high-A Lynchburg. Overall, he had a 5.45 ERA. It was his final season as a pro.